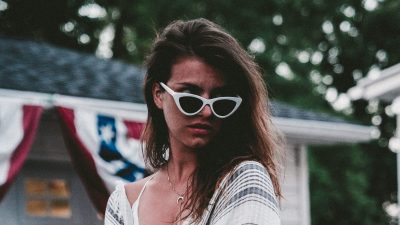 You know, the usual stuff, panty buyers trying to get something for nothing.

Buyers offering up $$$s if I could send them some free pics.

Buyers asking me to send panties and they’ll pay me when they arrive… (Haha, good one!)

Buyers asking me to send a sample as proof I am who I say I am.

I try not to let it get me down or turn me into a cynical wench. That’s work in itself!

But I grew complacent thinking I knew all the moves.

Up until last weekend, that is.

A guy almost got me to part with my address.

I literally typed it out on the screen ready to send! Can you believe that?

Then I stopped and asked myself whether I was seriously about to do this.

To back up a little in the story, the guy sent me a KIK message and claimed to be from the panty selling platform I use. Gave me the username and everything. Referred to his two reviews.

I don’t know why but something inside me told me to message that guy on the platform itself. My intuition told me to do it. So I did.

And just at the point I was almost about to part with my address (for an Amazon order) I got a message through said panty selling platform from a guy who had clearly never interacted with me before.

I called the guy on KIK a liar and instantly blocked him.

And I shat myself at how close I came to being scammed and putting myself at risk!

Was this guy going to show up at my door one day?

Probably not. In all likelihood, he was going to pretend to order the Amazon order and then cancel it once he got the media goods.

But still, I chastised myself for being so fucking trustworthy and complacent.

Complacency has no home in this line of work. Even ‘regulars’ that you trust.

And trust your intuition EVERY. SINGLE. TIME.

It’s there for a reason.

An epic couple of days sales-wise.

Sold panties and video bundle – to guy that the scammer claimed to be nonetheless!!
Another pair and custom video.